The stadium is a specialized work on structural behavior conducted at the Institute for Design and Construction Technology (Lehrstuhl für Tragwerkslehre, Prof. Dr. Rainer Barthel). The aim of the project was to design a new stadium for the European Soccer Championship, which will be held in Ukraine and Poland in 2012. It was crucial that the desired stadium not only meet the regulations of a FIFA soccer stadium, but also realize a geometric solution for its roof structure that could be optimized and adjusted to its spatial and functional needs. With that in mind, the entire project was developed using parametric design, allowing flexibility throughout the design process. By programming a mathematical function that would create a given number of spirals around any torus shape, spaces and cantilever length could be adjusted to the pre-defined ranks and produce an optimal geometry. A structural grid was scripted on top of the spirals thereafter.
The final GC model consisted of a basic spiral grid with several factors all programmed as variables, such as length, width, height, stretches and contractions. An exact foundation ring as well as the inner roof- and structural connection ring was defined. The complete façade structure, with 288 polygonal steel beams, was fitted to this pre-defined geometry. A façade sub-system was developed from rotating radial axes along the designated spiraling curves. The digital raw models could be analyzed by static software (R-Stab) to calculate the resulting shift from deformations and internal forces. In an iterative process, 2D sections and full stadium models of different structural solutions were tested and compared in their efficiency. A final solution consisting of two separate systems was thus developed. With the structural system defined, a detailed plan of all joints and profiles could be established. Small digital models of the different joints were built and created as features and could then be plugged into the initial raw model file, creating a complete, detailed, digital stadium. This parametric source was used for all further visualizations, i.e., plans, sections and renderings. 2D milling, 3D milling, 3D prototyping and laser cutting were used to create detailed models in different scales. 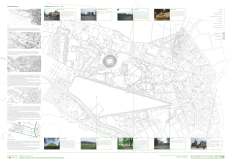 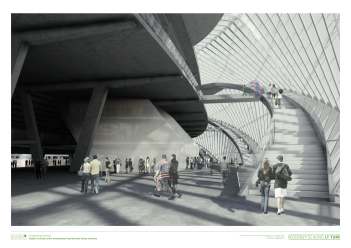 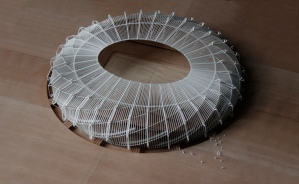 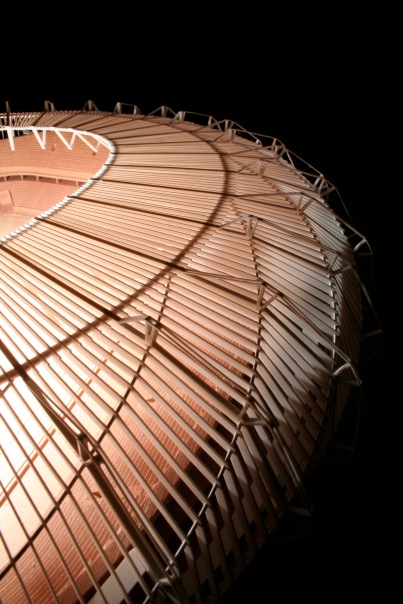 David Kosdruy and Eike Schling presented the stadium at the Smart Geometry Conference in Munich, 2008

The project Stadium in Krakow was published as a GC Case Study for Bentley.